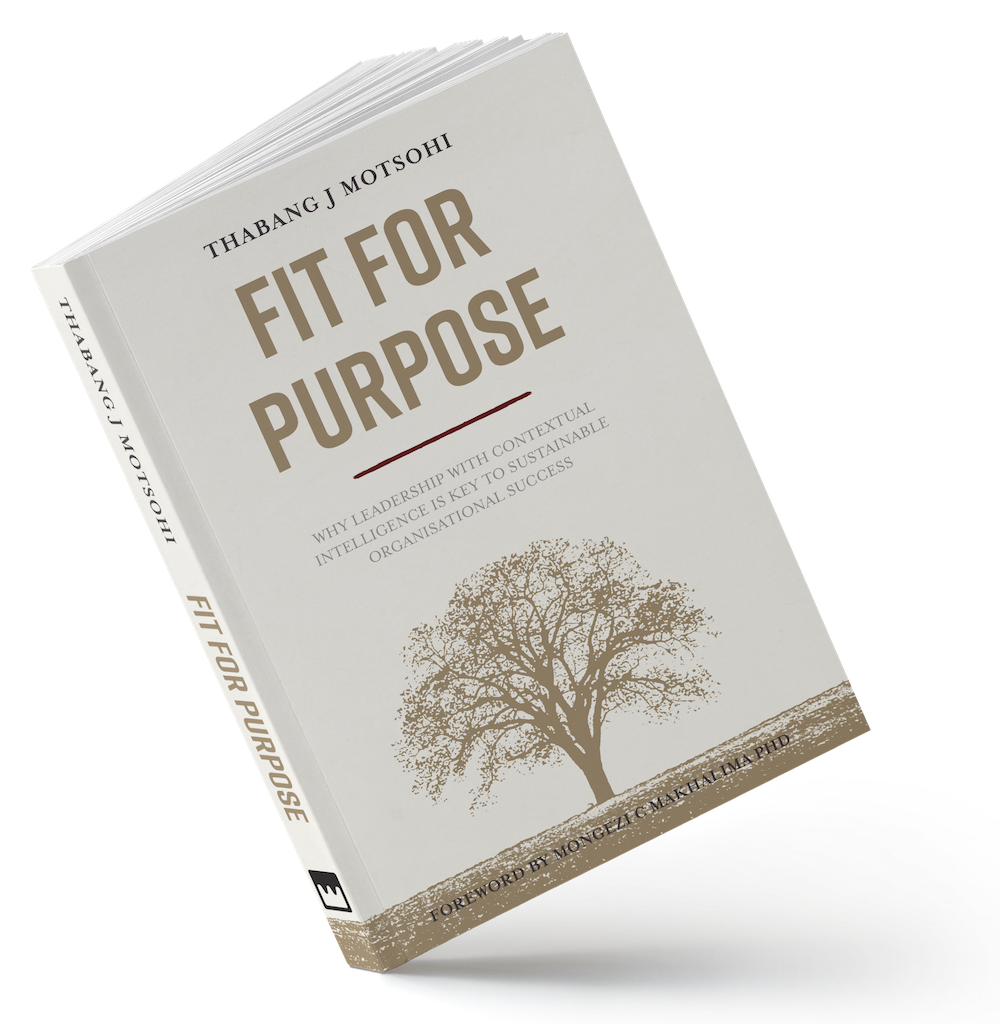 Fit for purpose. Why leadership with contextual intelligence is key to sustainable organisational success, by Thabang Motsohi

“The Fit for Purpose approach is a thinking methodology that instills the discipline of bringing context into the centre when considering the performance and prospects of an organisation.” Clearly, there is nothing more dangerous to any organisation than to expend considerable effort doing what should no longer be done.

The author, Thabang Motsohi, demonstrates this point with depth and clarity, using examples from the political arena as well as business.

The choice of such widely differing examples illustrates a single point: All organisations, whether their objective is to constantly make the lives of citizens better (political), or to increase their value to all stakeholders, have very similar fundamental principles.

The clarity with which the leaders understand and the degree to which they agree to the objectives of the organisation is a fundamental of success.  It determines whether the organisational design or business model is appropriate and so making it “fit for purpose.” This is too often presupposed, and too often falsely so, and too often with awful results for either citizens or stakeholders.

With purpose unequivocally understood, and lodged front and centre of corporate decision-making, an organisation can focus on the first part of the title phrase – “Fit”. Is the organisational structure and its business model the best way to achieve that purpose? And here is the problem: even if it is undeniably correct, this is rarely a static state. As circumstance all around the organisation (and as often, within the organisation) change, how the organisation remains true to its purpose must change appropriately.

Two of the many case studies in the book are the ANC and African Bank.

“The challenge for leaders is to ensure that the organisations stay resonant with the dynamic context in which they operate, otherwise they will face a definite existential threat,” Motsohi explains, arguing that the challenges facing the ANC in the 21st century are truly existential.

The ANC-led Tripartite Alliance was formed to rid the country of apartheid prior to 1994. Its purpose then was to replace apartheid with a democratic system, underpinned by universal human rights, the rule of law and the Constitution.

After the Alliance’s success in achieving that aim, it then had to reposition itself to run a country, an entirely new set of circumstances. The purpose had changed, but the structure had not. Additionally, within the Alliance the differing views of how to accomplish the mandate required by the oppressed majority, differed widely and deeply.

How the government was to bring social services conveniently to its citizens and at the same time to create economic conditions that led to the growth of the country and the full employment of its people, created inevitable fissures. This was to show as the ANC designed policies that were pejoratively labeled as “neo-liberal constructs of the World Bank and the IMF”.

Using the “Fit for Purpose” framework would require a consensus without which the thrust of the purpose could not be attained. Fit for purpose starts with the purpose deeply and uniformly held by the leadership.

Motsohi brings numerous articles he himself published to elaborate this analysis from a variety of angles.

With the purpose established, leaders in any organisation need to acquire and to project a very high level of contextual intelligence. Motsohi illustrates this point with keen insight and clarity in his example case of African Bank.

The case study opens with his assertion that the Bank was a case of “how a business organisation was led to its downfall by the inability of its leaders… to comprehend the critical changes in its operating context and adapt accordingly.”

African Bank acquired Ellerine’s, the furniture retailer to the lower end of the market. The intention was to be the funder of its clients’ furniture acquisitions. In effect, a bank experienced in funding loans to this economic group, would expand its client base through Ellerine’s furniture sales.

But the Bank failed to study and understand the living conditions and borrowing practices of their client base, Motsohi asserts.

The primary clients of the bank were offered loans on the highest interest terms legally allowed, without having to provide collateral. These rates were more favourable than those offered by the informal micro-lenders who similarly required no collateral. On the face of it, this appears as a compelling offering for the retailer, the lender and the borrower.

However, the differences between the micro-lenders and the bank is that the micro-lenders enforce repayment through the clearly understood “force” that would be exerted on defaulters. The Bank, by contrast was benign as well as lax in its enforcement.

Adding to the Bank’s misunderstanding of its clients was the common practice of households juggling multiple repayments – effectively getting Peter to pay Paul until wages are received. This could only last as long as the borrowers receive their wages.

Many factors made the Bank’s presumption of high levels of repayments incorrect. Included in this was that any economic downturn would lead to layoffs that would affect their clients most severely. The extended mining strikes, for example, led to clients defaulting on loans.

And then there were the accompanying poor sales levels at Ellerine’s, which meant diminishing cash inflows to support the Bank’s bond repayment commitments.

The Fit for Purpose model requires that the leaders are aligned in their “purpose” (Motsohi argues that the Alliance was not), and that they have “Contextual knowledge”. This knowledge entails the astute and insightful comprehension of current events and their impact, which Motsohi argues African Bank leadership lacked.

Motsohi’s clear illustration of his thesis will leave the reader with the feeling that this is a blinding flash of the obvious. The value of reading the book is the illustration of how rarely the obvious is embraced and executed. That makes this interesting book a necessary read for all who run organisations.

Ian Mann of Gateways consults internationally on strategy and implementation, is the author of ‘Strategy that Works’ and a public speaker. Views expressed are his own.

Delivery to your door, countrywide.

For International Shipping, please contact us at thabangm@lenomoadvisory.co.za for assistance.